Edwin Barraclough   - 2020
We were sad to hear the news that Edwin, one of our past members, had died recently. Edwin joined the society as a young lad, along with his sister, in the 1960s.  We think his first performance was playing Little Buster in our 1961 production of Emil and the Detectives.  As adults, many of our members go on to join other drama societies and Edwin was no exception. From the 1970s onwards Edwin worked and performed with a number of local groups including Leeds Youth Players, Leeds Art Theatre and Leeds Arts Centre - and he mentored many youngsters over the years especially those interested in working behind the scenes.
Judith Unwin (Judith Daniel)
​President of Leeds Children's Theatre 2014 - 2020
Judith became a member in the 1970s after her daughter, Louise, decided she'd like to join the society. Before long the entire family had been roped into joining! A great fan of David Wood's plays and adaptations, Judith directed many of our productions over the years, as well as leading our weekly Saturday Drama Workshops.  Judith was also an actress and took on a variety of roles, not just with Leeds Children's Theatre, but with Cosmopolitan Players and Leeds Art Centre.  A retired teacher, Judith especially loved working with our younger members and she took great pride in their progress and future successes.  Judith was a fantastic advocate of Leeds Children's Theatre and in 2016 was delighted to receive the NODA President's Cup,  in recognition of her work with the society over the years. 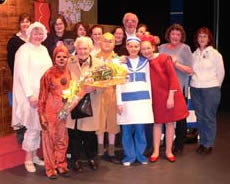 We have to report the sad news that, Mrs Elsie Brown, one of our founding members, passed away.
In spite of retiring to Wales many years ago Elsie remained a great supporter of Leeds Children's Theatre and visited us during our production of The Gingerbread Man in 2006. A lovely Lady who will be truly missed. [May 2009] 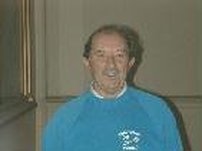 11 June 2005
We are sad to report that Bill Fawcett, our great friend and President, passed away on 11 June. Our sincerest sympathies to Jackie and the rest of Bill's family at this sad time. Bill joined LCT back in 1977 when he first brought his daughter to rehearsals, and he's been helping us ever since. Bill was our Box Office Manager, our President and our friend. He worked with Barry and a small core team of volunteers painting and building scenery, and even planned his family golfing holidays around our show dates. He will be sadly missed by everyone in theatre.

February 2005
We were very sad to hear that Edna Barwell passed away earlier this week, and wish to extend our deepest sympathy to Edna's family.
Edna ran our drama workshops as well as producing and performed in many LCT shows over the years. More recently Edna was involved with other Guild societies, including LIDOS and G&S. In fact she was helping to paint scenery for LIDOS panto only a couple of months ago. A lovely lady, responsible for many people joining LCT over the past four decades.

" Edna was a committed thespian who enjoyed passing on her skills, knowledge and enthusiasm to anyone prepared to ‘have a go’, me included. She joined the Leeds Arts Guild many years ago and was responsible for starting our Saturday morning workshops when she was directing ‘Pinocchio’, to teach the cast members improvisation skills. Countless people look back on their childhood Saturdays with great affection thanks to Edna. She was often to be found in the rehearsal rooms or helping to paint scenery, usually with her dog close at hand. She wrote two plays for us, the other being ‘Olaf and the Pink Penguin’. ‘The Magic Scarf’ was based on an original idea for a short play by Viv Mercer and passed on to Edna by Chris Waites, who was persuaded to direct when Edna had written the extended play. Over the years we had tried to persuade Edna to come back and direct her show for us, but she was adamant that she wanted me to do it. We had quite a few ‘discussions’ about it! She was a wonderful lady and a great friend so I hope that if she’s watching from ‘the Gods’ we’ve done her proud." Jane Curtin, director The Magic Scarf, Nov 2006