The Amazing Maurice and his Educated Rodents
16-19 November 2016
at the Carriageworks Theatre, Leeds 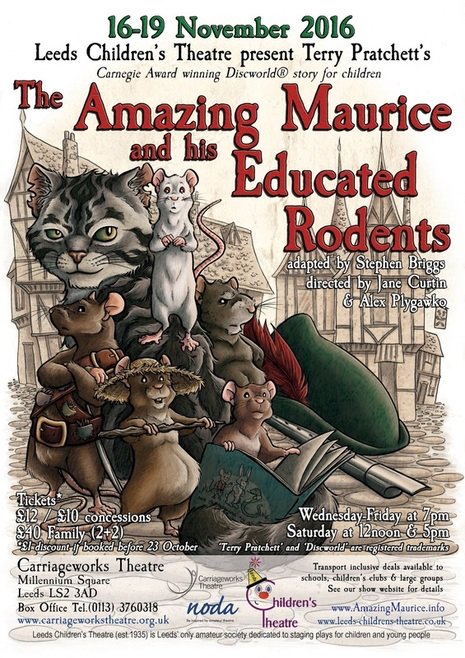 Maurice, an amazing cat, who has survived four years on the toughest streets in the whole of the Discworld, reckons that rats are dumb. Clever, OK, but dumb. Maurice, however, is smart -- smart enough to recognize that there's a new kind of rat around; rats that have been eating wizards' rubbish and can now talk. And Maurice is also smart enough to get a pretty amazing idea when he spots a kid playing the flute. Now he has his very own Pied Piper to go with his "plague of rats." And Maurice's money-bags are getting fuller and fuller. That is, until the group reaches the far flung village of Bad Blintz and they soon realise that this town is different. The rats spread out on their mission to dismantle traps, bury poison, do some serious widdling, and to find out exactly what those resident rat-catchers are up to. But something very bad is waiting for Maurice and the gang in the cellars... ​​
‘Terry Pratchett’ and ‘Discworld’ are registered trademarks