Stars that still shine - gone but not forgotten

Created in recognition of past members and their important contributions to Leeds Children's Theatre ... 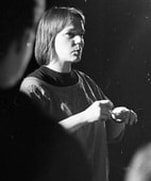 Sue Elliott - 1959-2018 (Susan Maitland Elliott, nee Milne)
We were shocked to hear that our friend and long time member Sue had passed away, quite suddenly and unexpectedly, at the end of June. Sue had been a member for many years, having first directed for us back in 1998 (The Red Dragon). Many people will know that she met her husband at the theatre, and quickly introduced her son to Leeds Children’s Theatre as soon as he was old enough to get involved. A talented musician, Sue’s association with local music and drama groups started when she was a child. Her parents were very active members of Leeds Youth Opera Group (since they helped to start the group in the 1970s), and her father Andrew also directed The Stone Cage for Leeds Children’s Theatre way back in 1978.
Sue was gifted in so many ways, admired by the many people whose lives were enriched by knowing her. Sue was a friend, a mentor and an inspiration to us all.  ​

Cecelia Powell - 2016
We were sad to hear the news that one of our past members, Cecilia Powell, had died earlier this year. After being introduced to Leeds Children's Theatre by her husband Tim, Cecilia directed one of our productions at the Civic Theatre, Rumpelstiltskin in 1978.

Ray Patrick, - October 2015
​Ray and his wife Jan performed in numerous LCT productions as well as being very active committee members before they retired and started their new adventures.
(This photo shows Ray as King Patch, 1980)

Elsie Johnson, 1928-2014
Many of us have fun and fond memories of Elsie as she was a great supporter and friend to Leeds Children's Theatre. The photo here is of Elsie during our 1990 production of Alice's Adventures in Wonderland and Through the Looking Glass, when she played the White Queen/Sheep.

Terry Fannon, 1958-2012
Terry joined Leeds Children's Theatre after marrying long time member Diane, and volunteering to take some of our production photographs. In time he joined the committee and eventually became our Treasurer - a position he held for a number of years.

Elizabeth Dallas (Liz Brice), -2011
Liz got involved with Leeds Children's Theatre when her two sons joined the society. As a media professional she had lots of help and advice to offer us, and eventually became our Press Officer. Even when Charlie & George left for University Liz was happy to carry on helping the group, until her own ill health made it too difficult. Liz and her family continued to support the society, coming to see our productions at the Civic and later the Carriageworks Theatre, and she is sadly missed by members who knew and worked with her here at Leeds Children's Theatre.

Bill Fawcett, 1930-2005
Bill became involved with Leeds Children's Theatre through his daughter, who was a member back in the 1980s. He carried out numerous roles, from Box Office Manager to President, as well as being a willing volunteer helping to build and paint scenery for numerous productions. Long after his daughter left the society Bill still continued to work with us. He was a modest man, kind and gentle and extremely well thought of by everyone her at Children's Theatre. 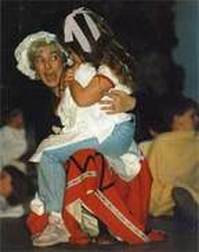 Edna Barwell, 26 Nov 1936-February 2005
Edna ran our drama workshops as well as producing and performed in many LCT shows over the years. More recently Edna was involved with other Guild societies, including LIDOS and G&S. In fact she was helping to paint scenery for LIDOS panto only a couple of months before she died. A lovely lady, responsible for many people joining LCT over the past four decades.
" Edna was a committed thespian who enjoyed passing on her skills, knowledge and enthusiasm to anyone prepared to ‘have a go’, me included. She joined the Leeds Arts Guild many years ago and was responsible for starting our Saturday morning workshops when she was directing ‘Pinocchio’, to teach the cast members improvisation skills. Countless people look back on their childhood Saturdays with great affection thanks to Edna. She was often to be found in the rehearsal rooms or helping to paint scenery, usually with her dog close at hand. She wrote two plays for us, the other being ‘Olaf and the Pink Penguin’. ‘The Magic Scarf’ was based on an original idea for a short play by Viv Mercer and passed on to Edna by Chris Waites, who was persuaded to direct when Edna had written the extended play. Over the years we had tried to persuade Edna to come back and direct her show for us, but she was adamant that she wanted me to do it. We had quite a few ‘discussions’ about it! She was a wonderful lady and a great friend so I hope that if she’s watching from ‘the Gods’ we’ve done her proud."
Jane Curtin, director The Magic Scarf, Nov 2006 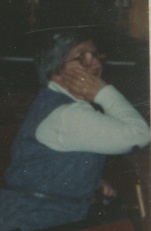 Kathleen Ward, 1915-2002
"Aunty Kath" joined Leeds Children's Theatre back in the early years, along with her husband Eric. Kath was secretary of the society for a long time, and worked tirelessly for the group as our Life President until ill health made it too difficult for her to continue. All our members of a certain age will have their own fond memories of Aunty Kath, sharing a friendly chat over a cup of tea backstage at the Civic Theatre.
Tim J Powell, 1945 - 1998
Tim joined Leeds Children's Theatre back in the 1960s, and again in the 1990s. His wife, Cecilia, also became involved with the society after they married in 1975. His last ever performance for us was as the Crowman in Worzel Gummidge in 1994. 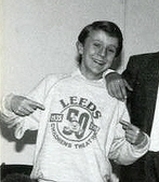 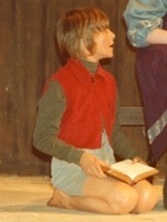 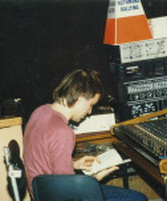